A nurse participated in a special service today to mark 73rd The birth of the NHS is said Watch Hours that the occasion provided an opportunity to reflect on the coronavirus pandemic and the sacrifices made by health workers.

May Parsons, modern respiratory matron at University Hospitals Coventry and Warwickshire NHS Trust, who administered the first Covid-19 vaccine to a UK patient outside clinical trial, was invited to speak at a ceremony this morning in St Paul Cathedral in London. .

Ms Parsons was also accompanied at the ceremony by other NHS staff and fellow nurses including chief nurse officer (CNO) for England Ruth May, and Sam Foster, chief nurse at Oxford University Hospitals NHS Foundation Trust.

In a conversation with Watch Hours, Ms Parsons described the role of the service, led on the part by former England CNO Dame Sarah Mullally, who is now the bishop of London, was an honor.

Ms Parsons described the event as a “time of reflection” and a time to remember health workers who have died and other sacrifices made by staff.

“It’s to remember the people who are lost, our comrades who are lost and those who, despite the fears, or the tragedies of it, come every day,” he said.

“It’s really nice to celebrate and reflect on what we’ve been through and how important the NHS is, that it’s free for everyone who needs it, regardless of their social status,” he added.

Since the first Covid-19 vaccine was given in December, Ms Parsons has been a well-known nurse and has used her profile to encourage people from minority backgrounds to make their offer.

He said it was a privilege to act as a representative for NHS workers in Coventry and across the UK and to “give them a voice”.

“I think putting a face on the NHS… has made it more human to people looking outwards,” Ms Parsons added.

In terms of the current situation of Covid-19 in her confidence, Ms Parsons said there had been an increase in patient numbers to double the number, in line with the increase in cases nationally. 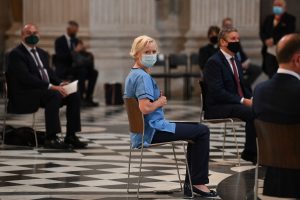 However, he said the numbers were much smaller than the “hundreds” there in December before the vaccination program took effect, and there are now very few patients with intensive care.

“It’s a drastic difference from what it was from starting to roll out, for sure,” Ms Parsons said, urging the public to “get your jab” when offered.

Meanwhile, the nurses were also among those invited to a tea party at Buckingham Palace today hosted by Prince William.

The event is one of thousands happening across the UK as part of the NHS Big Tea – the national celebration of NHS staff organized by NHS Charities Together.

Alexandra Heys, nurse ward manager in the respiratory high care unit at Gloucestershire Hospitals NHS Foundation Trust, said she was “honored” to have received an invitation to the palace.

He recounted how in his unit alone, the team has cared for more than 300 untreated Covid-19 patients since the pandemic began.

“All NHS staff have lived longer and beyond, providing more care in difficult situations, including connecting isolated and highly ill patients with their families in their most challenging times,” he said. added Ms Heys.

“We’ve all had a lot to go through, so seeing the public behind NHS Big Tea as a size scale is a huge boost and really makes a difference.”

Separately, NHS staff are also now honored by the Queen, who provides health services as a George Cross organization.

The medal recognizes “deeds of the most heroic or the most courageous in the most dangerous circumstances”.

Among the celebrations, it was also pointed out that NHS workers in England, Wales and Northern Ireland continue to wait for a decision on the new pay deal for 2021-22, which is due in April but has been delayed.