Ministers in England and Scotland are considering removing self-isolation rules for nurses who have been double-vaccinated before the rest of the population to ease labor pressure amid high Covid-19 cases and rise in hospitalizations. .

However some groups, including the Royal College of Nursing, urge caution and want to ensure that nurses are well protected and have access to the “highest level” of personal protective equipment (PPE ).

“If case numbers are high, even just 3% end up in hospital putting pressure on the NHS, and we’ll see that”

Governments across the UK this week issued updates on their plans for lifting coronavirus bans, with each country having a different approach.

While the situation is rapidly changing, ministers in England and Scotland are proposing that, in the coming weeks, people who are fully vaccinated will no longer isolate themselves for 10 days if they have identification as a close. contact with a person with Covid-19. .

In England, the set date for it to take place is 16 August, while Scottish first minister Nicola Sturgeon says the rule of self-isolation could change once Scotland moves beyond the “zero levels. “bans, which are now planned for 9 August.

Asked yesterday during a virtual parliament meeting whether NHS workers were “ahead” for faster self -adjustment, to “help ease the increased screening” in Scottish hospitals, Ms Sturgeon that it is “thought out”.

“If we’re talking about reducing self -isolation requirements for health workers to help keep health service afloat when that’s perfectly legitimate,” he said.

“But if you’re a health worker and you’ve heard what I have to say about what it can be like to reduce the protection against Covid that you get – you might sound that different.

“So, we have to deal with these things very closely and recognize that it’s health, people’s lives, we’re talking about.”

Ms Sturgeon cited Covid-19-related outages across the NHS as now at 1.6%, noting that “some of that is self-limiting”.

“So, it’s an important issue, but it’s important to discuss how we deal with it with healthcare workers,” he added.

“If the Scottish Government wants to change the rules for healthcare workers, they need to show how they manage any risks”

Under the testing and monitoring rules, health workers do not have to be isolated if they are wearing PPE when contact occurs.

Covid-19 cases in Scotland over the last week were among the highest in Europe, but Ms Sturgeon said infection rates had already begun to rise and had even slightly declined in recent years. days.

The latest figures show there were 2,529 new Covid-19 cases reported in Scotland on 13 July.

According to Ms Sturgeon, 3% of cases have now been hospitalized, compared to 10% in the January wave.

But he warned: “If case numbers are high, even just 3% end up in hospital putting pressure on the NHS, and we’ll see that.”

He added: “Hopefully with new cases starting to fall, hospital admissions will also be seen to fall in the coming weeks, but for now, the pressure on the NHS is worrying.”

Ms Sturgeon said her intention was to move all national-level venues to zero on Covid-19 bans on July 19, meaning more people would be allowed to meet indoors and attend weddings. and burial.

However, unlike England, he said the mandatory use of face masks would remain for “a few hours”.

The hope is that Scotland will move forward to level zero as well from 9 August, removing most of the legal bans on Covid-19.

The Royal College of Nursing in Scotland reiterated the “severe and immediate pressure” on the Scottish NHS, which was said to be combined with “significant staff shortages reported by many health boards”.

Martin MacGregor, vice chairman of the board of RCN Scotland, called for “urgent action” to help the situation, but stressed that “patients and staff must have continued protection from serious infectious disease” .

“If the Scottish Government wants to change the rules for healthcare workers, they need to share the science they have, show how they manage any risks and ensure nursing staff have access to the highest level of PPE, “he added.

Meanwhile, UK prime minister Boris Johnson confirmed in his report to the government on Monday that bans would be reduced in England as planned on July 19, despite much concern from the care profession.

Admitting to have “many hospitalizations and many deaths from Covid”, he said “now is the right time to move on” with the lifting of coronavirus rules, between the school holidays and before the months in winter.

In England, the legal requirement to wear a face mask would be removed, but Mr Johnson said ministers “expected and recommended that people wear a face mask that covered a large number of people and closed spaces where you talk to those you don’t usually meet, such as public transportation ”.

Separately, a spokesman for the Department of Health and Social Care confirmed the Watch Hours that face masks should still be worn in health settings, such as guidance on infection prevention and control.

During his briefing, the prime minister also commented on a BBC reporter about the potential to end self -isolation rules previously for staff who were double vaccinated. 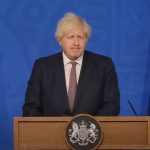 In response, he said: “We will look at ways to try to get the NHS back to Covid’s initial operation without the need for social isolation and for contact isolation.”

But he told the reporter they would “just wait a bit for the health secretary to give us exactly what we want to do.”

Speaking to Times Radio of potential plans to make vaccinated NHS staff isolated from self-isolation if it can be traced to a close contact, NHS Providers chief executive Chris Hopson said a “growing count of trusts ”reported concerns about“ the level of staff isolation as it now affects the importance of their ability to deliver care ”.

“One trust tells us that they now have 500 staff a day out of work because of Covid-19, most of it due to self-sufficiency,” he added.

As the Covid-19 infection rate is “rapidly increasing”, Mr. Hopson is concerned about how many staff will be told to isolate themselves.

However, he went on to emphasize that it is “important that trusts do everything they can to protect patients and staff from taking Covid-19”.

“Talking to trust leaders, we concluded that, given the current severe impact on service delivery, it is appropriate for the government to review their proposed approach to self -segregation as it affects NHS staff,” he added. Mr. Hopson.

“A trust now has 500 employees a day out of work because of Covid-19, most of it due to self-isolation.”

“It is important to remember that almost all NHS staff have been vaccinated and they are among the first groups to receive vaccinations.”

He said one option that could be considered was to “separate NHS staff from the isolation of self -paid full compensation from more frequent staff testing”.

“No matter what happens, we need urgent decisions here, because of the rapidly growing pressures on trusts,” he said.

Last week the Northern Ireland government outlined its intention to lift the Covid-19 bans from July 26, which will allow more people to meet indoors and outdoors, as well as cuts in social isolation. .

But the requirements for face mask and self -isolation are set to be considered in more detail at a government meeting on August 12.

In the meantime, the Government of Wales is expected to provide its update on the mitigation bans at a later date.