A memorial service was held over the weekend to pay tribute to nurses and other professionals who died from Covid-19 while working in the NHS.

The event took place on Saturday afternoon and was attended by colleagues and families of people who have lost their lives as well as leaders of care, union and health services.

The ceremony was held at the London Blossom Garden, which was planted at Queen Elizabeth Olympic Park in Stratford as a living tribute and a space to display and remember the dead.

There was also a two minute silence and a wreath placed.

Figures from the World Health Organization released in May suggest at least 115,000 health and care workers have died from Covid-19 worldwide.

In January, data from the Office for National Statistics showed more than 150 nurse deaths involving Covid-19 were recorded in England and Wales last year.

In honor of the nurses who lost their lives to the pandemic disease, Watch Hours there is a memorial page online.

In her speech during the service, Ms Gorton said that hundreds of “dedicated” staff who lost their lives while trying to save others “should not be forgotten” and that “we owe them all owed with great gratitude “.

On the hit of Covid-19, “the UK is changing forever”, he told attendees.

“While most people are safely confined at home, NHS staff are doing what they always do – working to care for patients and save lives,” Ms Gorton added.

“But one night the day became scary. The staff was worried about their own safety and that of their families.”

As stocks of personal protective equipment began to “decline”, the virus then “quickly” took the lives of patients, before colleagues also began to die, ”he said.

Ms Gorton went on to highlight the unequal impact of Covid-19 on people from several minority backgrounds.

“It’s also not clear how Covid died which was fatal for some health workers and not others,” he said.

“But Black and Asian staff are more likely to get sick and die. Many come from around the world to work in the NHS.”

He added: “No part of the NHS team survived. Young workers and older colleagues died. The virus doesn’t matter if they are experienced staff or new to the job.”

Even if vaccines explain that the pandemic is already in “retreat”, he warns the impact of the pandemic “will never be eradicated”.

According to Ms Gorton there are nearly 1,000 NHS and care staff who have been “cruelly taken away”, leaving behind “grieving families and broken comrades”.

“Doctors, carriers, nurses, management staff, midwives, paramedics, cleaners, radiographers, servants, consultants, drivers, care workers and others from the whole NHS family work one day and not to be able to return, “he said.

Lessons from the pandemic “need to be learned so that the country is better prepared for the future” and “mistakes cannot be repeated”, he warned.

Meanwhile, Ms Issar said first in the service: “Each of the colleagues who died while caring for and protecting patients represents an immovable gap in a family and workplace.” 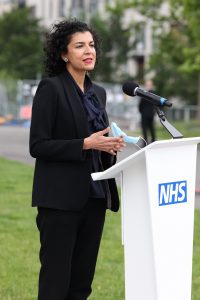 It is not “an exaggeration to say that health service staff have helped keep the country afloat during the pandemic”, he added.

Saturday night, after the service, landmarks across the country, including the Covid-19 vaccination centers, were urged to shine blue in partnership with the NHS for 73 of them.rd birthday on Monday and to thank staff for their contribution during the pandemic.

Commenting on the events on Saturday, Britain’s chief nurse officer Ruth May said: strange people have sacrificed especially those who have saved their lives. “

To mark the 73rd birthday of the NHS, the Queen presented health services with an award to George Cross.

Others are using the anniversary as an opportunity to renew calls for fair pay increases for NHS staff.