In case we need further proof that the U.S. labor market is in a historic supply-demand crisis triggered by the many benefits of Biden’s unemployment, a few hours later the latest NFIB showed no really harder for small business to fill job openings, times ago BLS confirmed what we expected: that the number of job openings in March (remember that JOLTS is a months delayed) rose to a record 998K to 9.286MM in April from a revised height of 8.288MM in the march, and the highest in the history of U.S. jobs data!

The record number is also a record beat of the already highly anticipated 8.2 million prints. 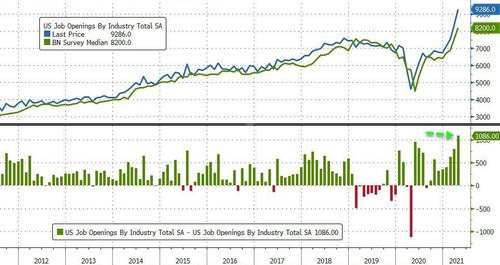 Separately, in yet another record of a surge in job demand since the collapse in April where there were 18.1 million more unemployed workers than there were job openings – the most on record – the gap went from growing to just 526K in April, down from 1.4 million in March. Yes: despite the shock of the covid, There are only half a million more unemployed than there are job openings! 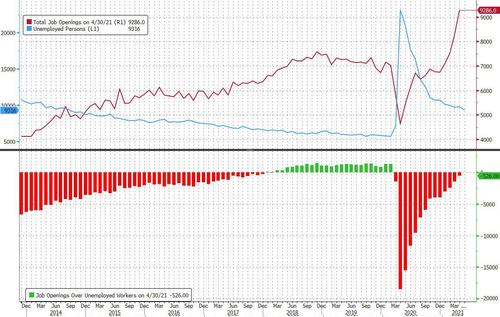 As a result, there is further improvement in the series available in the work, and in April there were 1.06 unemployed workers for every job opening, from 1.19 in March, down from 1.35 in February and from 4.6 in the crisis peak last April. 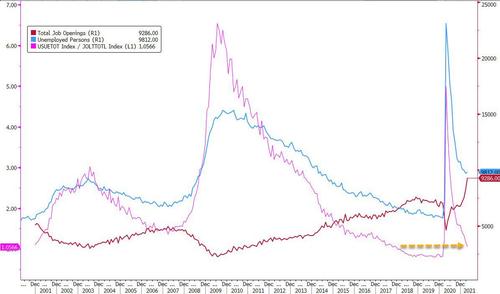 Meanwhile, the speed of photography was confirmed as the covid lockdowns were taken, in April the wage increase for the 4th consecutive month to 6.075MM, from 6.009MM in March. 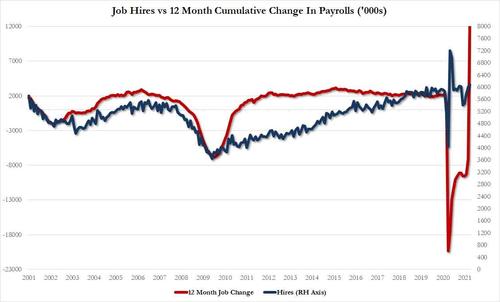 Surprisingly, while improving employees, total layoffs also increased to 5.8 million (+324,000). The overall rate of separations was slightly revised at 4.0 percent. The overall level of separations increased retail sales (+116,000) and transportation, warehousing, and equipment (+60,000).

Finally, confirming the excessive heat of the labor market fueled by “Biden’s trillion” and the tsunami of unemployment benefits that sparked a wave of job resistance overall, in April the layoff levels – or people who voluntarily quit their jobs out of better hope. anywhere – rose a whopping 384K to a record 3.985 million, after rising 185K and 77K in the past two months. The number of stops rose in many industries with the largest increases in retail sales (+106,000), professional and business services (+94,000), and transportation, warehousing, and equipment (+49,000). 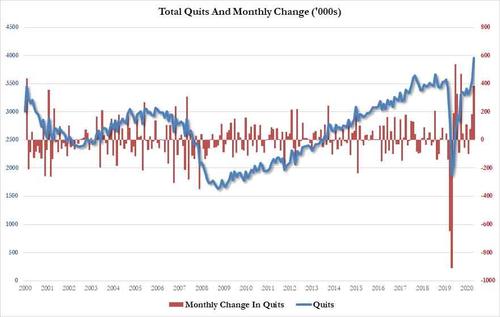